What if you bought a Haunted House?

The following is an extract taken from the Ombudsman Services website and begins with a Mr and Mrs Thomas.

Mr and Mrs Thomas were landlords, looking to purchase a buy-to-let property. They wanted a large house, to let in the short term, and eventually move into with their family.

The couple spotted an old manor house online and contacted the vendor’s estate agent to arrange a viewing. During the viewing Mrs Thomas suddenly felt ill, pale and queasy. She turned to the estate agent and asked: “Is this house haunted?” Visibly spooked, the agent curtly replied: “I’ve never been asked that before”.

The viewing continued. Mr Thomas approached the master bedroom across the landing. As he walked down the dimly lit corridor, he felt an icy cold breeze across his face. He reached out to the door handle and, as he slowly turned it and pushed the door ajar, it quickly slammed shut.  The door pushed back, with such a force that Mr Thomas felt like someone had shut the door on him from the inside.  The estate agent turned to Mrs Thomas and joked: “that must be that ghost of yours” as he opened the door. Mr Thomas nervously laughed it off and they continued the viewing.

Despite their supernatural experience, they loved the house so much that they paid a large non-refundable cash deposit to the vendors. No contracts were exchanged; however the deposit ensured that the vendors took the house off the market. Several weeks passed and the purchase was set to go ahead.

However, one afternoon whilst browsing in a local second hand shop the couple stumbled upon a book about the manor. Keen to find out more about their future home, they bought the book. With each page turned, the couple became more and more uneasy about the house as the book spelt out its sinister history.  The manor house was more than 200 years old, and built by its first owner, a cruel and wealthy shipping merchant who is said to haunt the house. Legend had it that his favourite haunt was the master bedroom on the first floor.

As the couple reflected on their experiences during their only viewing, a sinking feeling set in. Their dream purchase quickly turned to a nightmare. Angrily they called the estate agent to ask why he had not disclosed the property’s creepy history.

The agent responded that they were unaware of the house’s history, as was the vendor. The estate agent wasn’t local to the area and, anyhow, they were of the opinion that ghosts do not exist.

The couple withdrew from the sale the day before the exchange. The vendors retained the deposit.

The Thomas’ contacted Ombudsman Services to complain that the estate agent should have answered their question about the haunting during the viewing and they asked for their deposit back.

The ombudsman’s final decision was that it was unreasonable to pursue a complaint against an estate agent who had not disclosed the potential presence of a supernatural force. This is because it would not be possible to investigate and prove if there was a supernatural presence at the time of the one and only viewing.

If a consumer puts down a deposit to take a property off the market and does not complete the sale, the vendor can retain the deposit. They recommend seeking legal advice, before committing to non refundable monies.

The Ombudsman went on to state that it was unusual for a deposit to be non-returnable, as this is usually only the case once contracts have been exchanged and the buyer fails to complete. As the couple were experienced landlords, they thought it reasonable that they would have understood the risk in handing over a large non-refundable deposit. 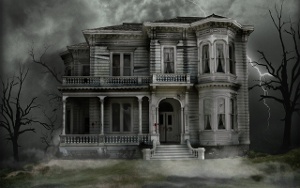